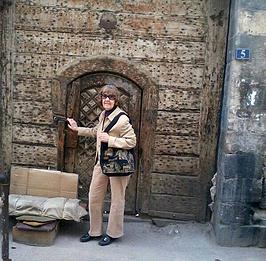 Elaine (shown here at a door of the Abdallah al Azem Madrasa) comes from a small town on the Hudson River which her Dutch ancestors pioneered in the 18th Century, but after converting to Islam, in 1960 she left it all behind and went to live in Damascus with her Syrian husband, Mohammed Imady, whom she met as a student at New York University. There she raised her three children, two of whom are also MSI Press authors, learned Arabic, taught English and music, and traveled the world with her husband, who became a Syrian cabinet minister.

Her first book, Postscripts from Palisades, was published in Syria by Dar Tlas and in the USA by the local historical society of her hometown as well as by iUniverse, Inc.

Now, after more than fifty happy years of marriage, Elaine, tells her story in Road to Damascus.

Her Facebook page on her book includes more information, with pictures, of Syria and the opportunity to interact with the author.