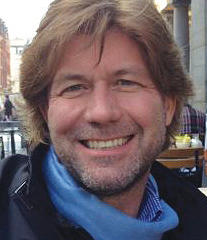 Omar Imady was born in Damascus to an American mother and a Syrian father. Educated at Macalester College (B.A.) and the University of Pennsylvania (Ph. D. in Middle Eastern Studies), he is a poet of long standing in the Middle East and the author of several books in Arabic and English. For over twenty-two years, Imady was the disciple of Bashir al-Bani (1911-2008), a Damascene Muslim scholar and a renowned Sufi mentor, a relationship that continues to influence Imady’s creative writing.

Magna Villa Publishing has published the second edition of The Gospel of Damascus,  . as well as French, Spanish, and Arabic translations of this book, Dr. Imady’s first novel. The first edition of the book was published by MSI Press and earned a Book of the Year Award 2012 (finalist).

A former professor of political science and academic dean at New York Institute of Technology in Amman, Jordan and currently visiting professor elsewhere, he has also authored When You’re Shoved from the Left, Look to Your Right: Metaphors of Islamic Humanism, which has gained a following in the United States and elsewhere, and The Rise and Fall of Muslim Civil Society.